"The Wall" published by Hub Magazine

You can download it here. http://www.hubfiction.com/
Posted by kwh at 1:06 PM

Paul lit one cigarette off another, as rain rattled down the drains and into the gutters of the boulevard. A young woman on a red scooter, her dress soaked and plastered against her lithe frame passed by the window, and Paul smiled, remembering other women in the rain.

Then he thought: Gunter is late as usual.

He nodded at the waiter, standing in the door, watching the rain and the girl disappearing around the corner, to signal he would like another red wine, a pinot noir, his favorite.

Cold fall rain is bad for business, he thought, as he finished the last drop in his glass before the waiter returned, but good for thinking and remembering.

He reached for his fountain pen, the Pelikan he bought in a shop in the Marais in 1987, when he had just arrived from Vienna, before he met his wife, the French woman who left him for the Brit, and wrote these words--hard writing. That phrase sounded a bit perverse or pornographic, he thought, but it expressed the sentiment, the sentiment he wanted to talk about to Gunter. It was his new theory, this idea of hard writing, which meant simply a new way for him to write. Perhaps everyone wrote this way but it was new for him. In the past, in die Vergangenheit--German was slipping back into his vocabulary--he had written through emotion. Without her and her Parisian French, spoken incessantly, he was falling back on the other language, the intermediate language, not his die Muttersprache, not Romanian.

He lifted the nib and pressed it to the white, thick paper of the cahier, starting again. In the past (la passé), he had written spontaneously through emotion but now he would not let a poem go until he had subjected it to his hard writing. Hard writing required time and thought; time, thought, and discipline; time, thought, discipline, and a rigorous eye. Was there more to it?

After hard writing an editor, he reasoned, should shrug and just publish it because it defeated him with its shape and being. Maybe he should call it diamond writing. He touched the cap of the pen to his lower lip and tasted its gold and silver.

The waiter delivered another glass. He put down his pen and sipped the wine slowly, tasting the earth of the southwest, with its berries and ash, as the wet girl, with the long black hair, passed a second time. Was she lost or was he dreaming of Plymouth where the pilgrims sailed for Virginia to become Prospero's children? Or was she the mistress of Setebos, Venus'moonchild, and he the sound of thunder?
Posted by kwh at 2:31 PM

he says
there is
no was
so being
that is
is
or never
was
Posted by kwh at 7:29 AM

Hub Magazine has accepted the short story, The City, for publication. I will alert you to its appearance.
Posted by kwh at 8:00 AM

nothing
and then something--
maybe compacted energy
or a hydrogen cube--
explodes
and spews
outwards
toward being
that cannot be
but is
Posted by kwh at 8:55 AM

"A mild-mannered scholar confronts his woman problems by delving into the mythic landscape of the south of France in this searching psychological novel.

Karl Wisent, a 30-ish German man living in Paris in the early 1990s, is writing a book about Nietzsche, but his life couldn’t be more un-Nietzschean. He’s thoroughly under the thumb of domineering women, from the censorious nuns at the Catholic girls’ school where he teaches to his estranged wife Heike, who lives in Berlin and has denied him sex for years. He finally takes—or rather is taken by—a mistress, Hélène, who is firmly in charge in bed and out. She makes it clear that he’s just a “contingent lover” for once-a-week trysts to relieve the tedium of routine sex with her live-in boyfriend. Weighed down by feelings of passivity and alienation, Karl retreats to a chateau in the countryside near Avignon, where he’s surrounded by symbols of an older, more authentic way of life. He takes in Stone Age cave paintings, communes with a peasant family and helps out with farm chores at a local monastery. He’s soon swarmed by a cosmopolitan group of semi-invited houseguests, including Heike and her new boyfriend, and finds himself the odd man out in their sexual roundelay. But he does participate fully in the party’s endless informal symposium, which ranges across such brow-furrowing topics as Greek, Egyptian, Icelandic and Hebrew mythology, the evolution of consciousness, the immortality of the soul and the sublimated cannibalism rite we call Christianity. As Karl applies all this lore to his anguished psyche, the book sometimes reads like a cross between Joseph Campbell and Freud. (One bevy of latter-day maenads advises Karl to project “the spirit of the bull” if he wants to satisfy a woman.) But Harvey writes with a subtle, evocative realism that keeps the ruminations grounded in the characters and their everyday travails.

An absorbing tale in which the quest for self-knowledge packs a lot of emotional resonance."
Posted by kwh at 12:33 PM

being finite
within the infinite

we fall
dissolve
and become
some
other thing

perhaps a grain
of sand
in an oyster's shell

or cellulose
in a blade
of grass

digested
by a snail
Posted by kwh at 9:49 AM

Here is the pitch:

One summer night in Avignon in 1972, the notorious German writer Georg Löwe introduces twelve-year-old Karl Wisent to myth, magic, and treachery; and, from that day forward, he struggles to escape the ghosts, goddesses, and girlfriends that haunt him.

Cave Gossip is a love story, but only in the sense that Iris Murdoch’s The Severed Head, François Truffaut’s The Man who Loved Women, or Robertson Davies’ The Manticore is a love story. Think, then, of Iris Murdoch writing A Hero of a Thousand Faces or Joseph Campbell penning Women in Love.

The plot consists of five distinct parts: Karl, while on a summer vacation in Avignon in 1972, discovers his mother is having an affair and then meets the notorious German writer Georg Löwe, who tells him a ghost story and introduces him to the healing magic of myth and imagination; Karl in Paris in 1992 enters into an affair with the self-absorbed Hélène, who lives with Gaspard, an actor; Karl in the summer of 1993 once again at the house in the hills above Avignon hosts seven guests from around the world who chaotically shatter his world of myth and fantasy; in Nice, Karl reunites with Hélène, who is pregnant with his child and on the verge of marrying Gaspard, and then Karl encounters the nine mythic “mothers” who gather on the beach to set him straight; and finally Karl in Munich in 2009 prepares to meet his fifteen-year-old daughter for the first time.

Ultimately, Cave Gossip is a fable about myth that tells a tale of moral blindness, mother-love, misunderstanding, magic, poetry, and mankind’s inherent use of myth to understand everyday reality.

Cave Gossip should appeal to anyone interested in myth, poetry, psychology, individuation, religion, romance, and, ultimately, the question of being.
Posted by kwh at 8:31 AM

or did she pass
into the night
while he watched
a red cinder
rise from the flames
and float
near the leaves
bruised and blue
from winter's ice
Posted by kwh at 9:53 AM 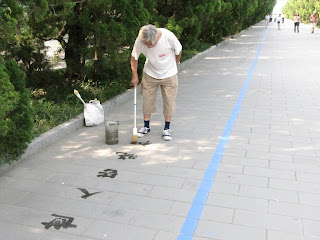 calligraphy of ink
and water lasts
only as long

as the sun
allows
or a passing
pedestrian remembers

ultimately both fade
as the liquid dries

hànzì like all entities
is translucent
transparent and transitory

so it is
that we measure
being and its entities
by evaporation
and shiny stain
Posted by kwh at 9:37 AM